Studying its eating cycle has been showing intriguing results. I've sent two unconscious clones so far to be ingested in its biomass. But their vital signs are still active despite some occasional spikes in the heart rate. One of them has been in there for almost a month.

I've sent another clone today but to be conscious during the ingestion. I needed a live subject to further study what happens in its digestion chambers and see if the biomass's behavior changes.

It is... immoral... sending a human consciousness through such a cycle, even if it's my own clone. Hopefully, the fact that she'll be waking up without any memory would help reduce the horror of ingestion...

I left my clone in the middle of the biomass's maw. The same tendrils approached her as usual. I woke her up remotely to see the reaction.

She looked confused and flinched when she noticed the tendrils. She seemed more curious than terrified and didn't put much resistance when the orifices on the tendrils engulfed her limbs.

Then she reacted to whatever was happening to her limbs. It wasn't out of pain so I assumed her limbs aren't being broken apart in those tendrils. But she still seemed surprised about something.

She is trying to move around but without much success. She was also not engulfed immediately like how it was with the other two clones.

This is a slow ingestion cycle.

Some more tendrils appeared and they're... playing with her.

I realized why those vital signs spiked with the previous clones within the biomass's digestion chambers. They weren't exactly reacting to asphyxiation or pain. They were sexual arousal.

I couldn't believe it when some of those tendrils carefully stroked my clone's genitalia. Neither could the clone, although, from the way she reacted, it might have been because of how it felt good rather than a violation of her body. She wouldn't have any sexualization reference imprinted in her to know how something should or shouldn't be touching her like that.

She frowned and was shocked. But it looked like she wanted more of that. The tendrils continued to tease her.

Looking at my own copy getting hot with some eldritch tentacles was... bothersome... and kinda fun to watch. 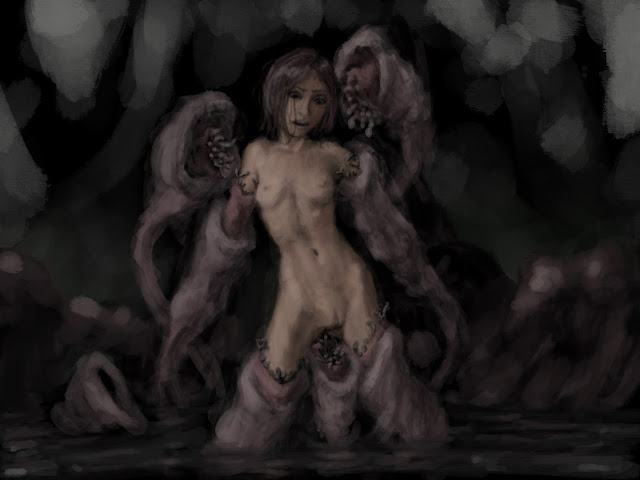 The biomass is still "eating" my clone and is currently 5 meters under the surface, although I'm not sure if the purpose of it is for full ingestion.

The tendrils made her have orgasms four times. I involved some sex toys for myself.

Something about the saliva has also been subduing her post-orgasm hypersensitivity and pain. I thought this was to paralyze its meals if they were still alive while being digested. But according to the clones' cellular readings, whatever the chemical she is bathing in is healing her. That shouldn't happen if she was to melt away, should it?

It occurred to me that my clones weren't being ingested but rather being milked. Although I can't imagine their oozing body fluid would be enough to feed such a massive biomass, I have suspected the creature is psionically connected to some type of an interdimensional entity.

I've basically been offering myself to an eldritch god. And it seems to have been feasting on my clone's lust and orgasms, whether she is conscious or not.

Another dream. I saw myself as that clone that is still making love to its ingestion chamber.

I feel the influence of this entity in my mind.

Could my clones have been making it more powerful? Is it using them as a conduit to influence me?

There are a total of 7 of my clones in there now. I did count 7 around me in my dream, all tied to its flesh chamber, a couple of them taking turns being fully engulfed in and out of the walls. I woke up as I become sucked into the wall and buried in it. I gave into an orgasm so quickly.

Could it have been real? Was I seeing through the eyes of one of the clones?

It couldn't have been. Otherwise, there should have been 6 around me, not 7.

I put a camera in my room to see how I sleep. I kept waking up wet. So I wanted to see if I'm struggling like I am in the dream. And partially I thought I might look a bit sexy looking like making love to an invisible being in the room.

It took me some time to process in my head, but turns out, a bunch of those tendrils sprawled out of my bedroom's wall and dragged me into a gaping flesh hole. A few hours later, it spits me back out, tried to clean me up, and puts my clothes back on.

I wasn't dreaming. It found me somehow, took me to its digestion chamber, milked my orgasms while I made love to it, then put me back like it didn't happen.

I checked the wall and there was no physical mark or damage. It must have been opening some sort of a portal to get to me.

There is nowhere to hide from it. But at the same time... it's a rather pleasant company to have?

I've been developing some sort of a relationship with the flesh biomass. It knows whenever I'm ready to get hot and I've been letting it opens up portals to approach me. Sometimes it does inside of my pants or sometimes my whole body could be in its organs while my head is still in my bedroom.

It returned my clones to me so they can rest. I offered it to keep one. I let it study me and it lets me study it. It felt fair. The outcomes have been quite rewarding. 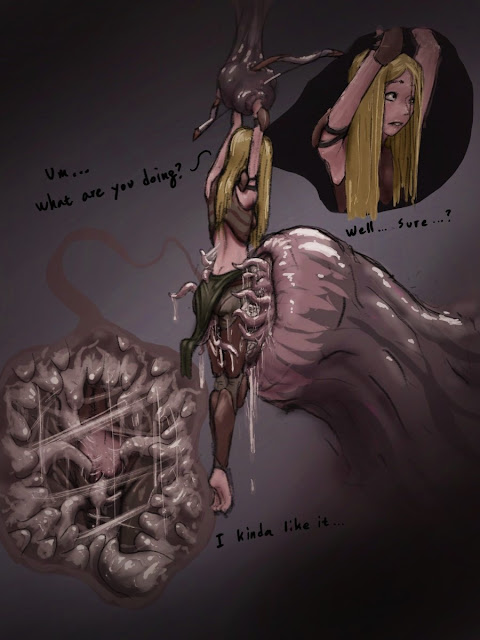 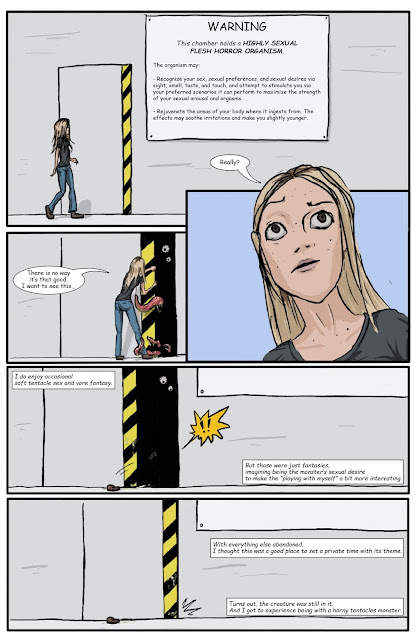 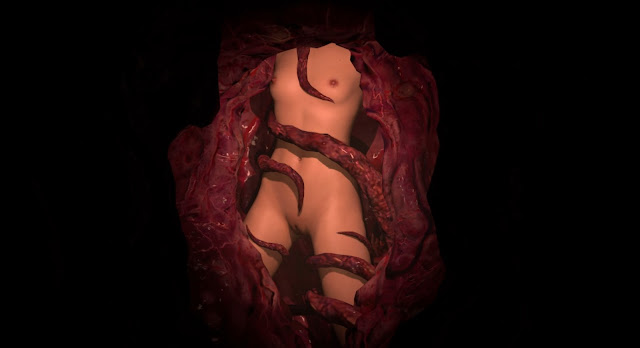